Five Reasons to Eat Brown Rice Instead of White

Anyone who knows how to cook white rice can prepare brown rice just as easily by allowing a little more time. Nature’s colors rarely include white, but the milling process for rice removes its brown tone as well as its nutritional elements. Brown rice is not refined, allowing it to retain its essential nutrients.

Removing the nutrition contained in the nutrient-rich germ and bran requires rice manufacturers to fortify white rice with B vitamins and iron to restore some of its food value. Brown rice contains vitamin E, a nutrient not found in white rice. Using brown rice instead of white can reduce the risk of developing Type 2 diabetes, according to WebMD, and it can aid in the prevention of other diseases as well. In its natural state, rice is a whole grain like oatmeal, barley, whole wheat, bulgar, and popcorn.

The benefits of brown rice are far superior to those found in the modified and fortified rice product that is the most familiar form of the grain, including these:

The outer hull of the brown rice grain is the only part that is removed in milling, leaving the fiber rich bran and germ. The Mayo Clinic’s list of high fiber foods shows that one cup of brown rice contains 3.5 grams of fiber, and white rice has less than half as much. A diet that is high in fiber improves the function of the digestive tract, and it may reduce the incidence of health problems such as diabetes, heart disease and obesity. Women need at least 21 grams of fiber daily, and men need upwards of 30.

Risk of diabetes diminishes with the regular consumption of a half cup of brown rice every day by helping to stabilize glucose levels in blood. Food that scores low on the glycemic index (GI) digests slowly and provides an even flow of glucose instead of a sharp increase. Food that is high on the index produces quick bursts of energy soon after they are consumed, resulting in a drop in blood glucose level that allows hunger to occur again. Brown rice has a GI rating that is more than 10 points lower than white rice, according to reports from the?Harvard ?Medical ?School.

Brightly colored fruits and vegetables are usually recognized as sources of antioxidants, but brown rice contains them as well. Antioxidants are valuable for repairing cells that are damaged by air pollution and substandard diets as well as for reducing the risk of developing heart disease. Researchers at the Harvard School of Public Health reported a higher risk of Type 2 diabetes among a test group of health professionals who ate white rice and a reduced risk by those who ate brown rice at least twice a week.

The National Institutes of Health (NIH) cites the importance of magnesium in the development of bones and in producing a normal heart rhythm, conduction of nerve impulses, and contraction of muscles. The Office of Dietary Supplements at NIH confirms that refining rice substantially lowers its magnesium content. The body depends on magnesium for nerve and muscle functions, control of glucose levels, and regulation of blood pressure. Up to 60 percent of magnesium in the body resides in bones, and most of the remainder is contained in soft tissue.

Low intake of magnesium increases the risk of developing some types of illness over time, including cardiovascular disease, hypertension, Type 2 diabetes, osteoporosis, and migraine headaches. A serving of brown rice contains 84 milligrams of magnesium while white rice contains only 6. The recommended allowance for women is 320 and 420 for men, with one cup providing 20 percent of daily magnesium requirements for men and 26 percent for women.

The colorful appearance of brown rice complements a plate, and it pleases the palate. Its consistency is similar to “al dente” in pasta, providing some resistance that releases a deliciously nutty flavor. As a complex carbohydrate, it supplies energy in a tasty form. The grains tend to remain loose and separate more effectively than those in white rice, and it needs no butter or gravy to give it flavor.

Healthier and better tasting brown rice provides many health benefits that are not available in white rice. Unfamiliarity with cooking methods prevents some cooks from experimenting with it, but its appeal to young and old who are fitness and nutrition conscious is increasing its popularity. 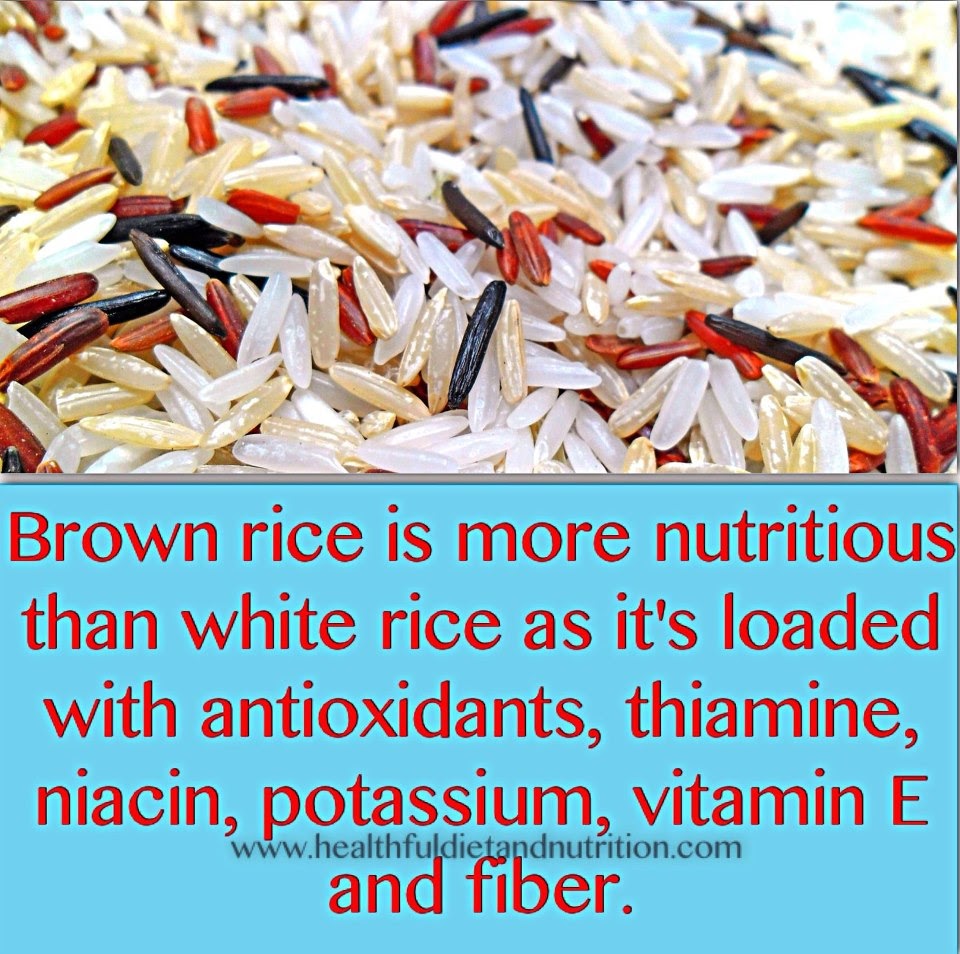